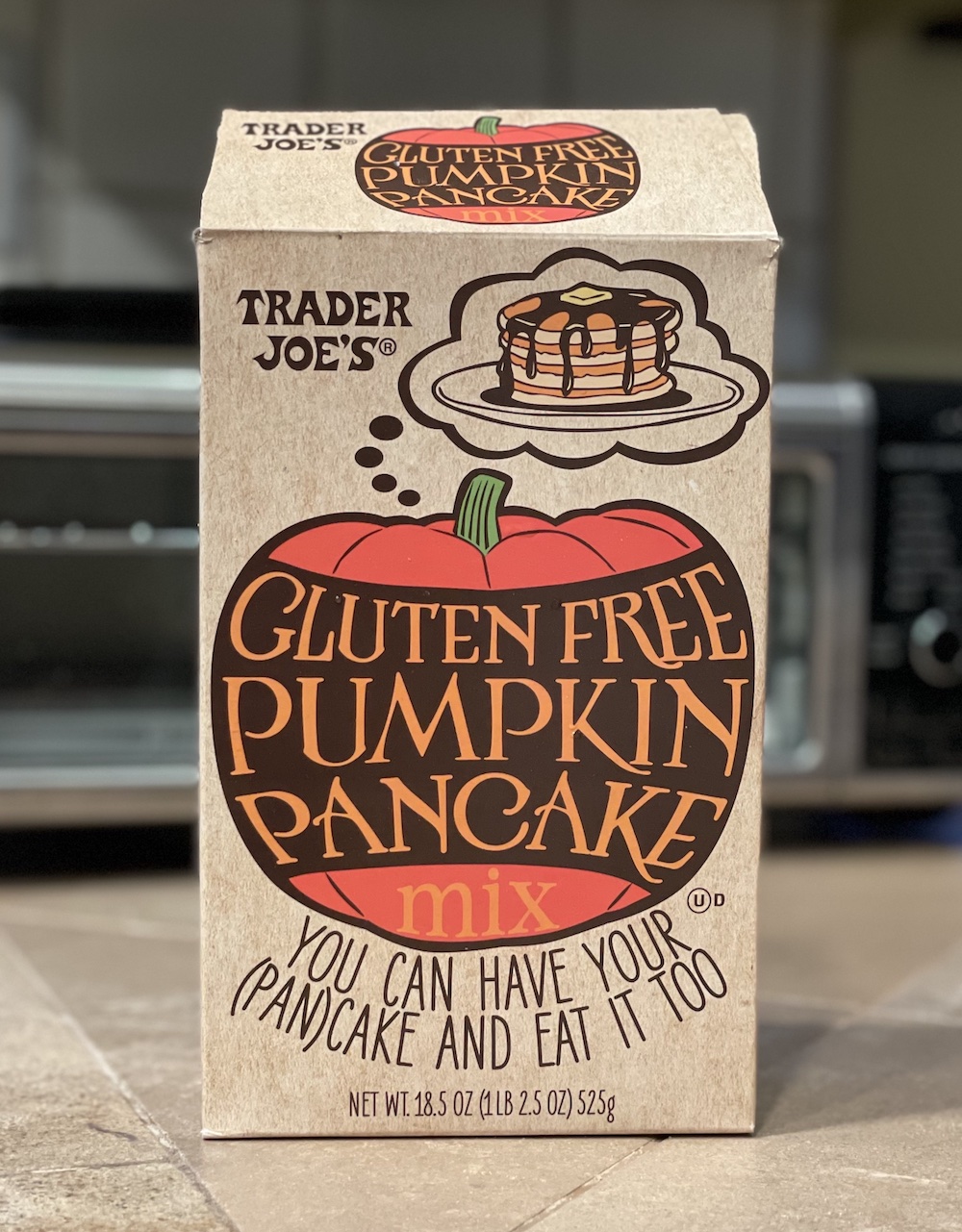 If you have been tempted to try Trader Joes Gluten Free Pumpkin Pancake Mix, you are not alone.

We all have different reasons for going gluten free. I have heard doctors say there is no such thing as a “gluten allergy” or “gluten intolerance”. For me I break out in what looks like small acne on my arms and legs when I eat bread or wheat products. It’s been that way my whole life. Dermatologists would recommend some crazy expensive soap that smelled like a hospital room. After a co-worker made fun of me at my job on the boat dock, I just started wearing long sleeves and track pants everywhere.

About five years ago I hit two hundred pounds and decided to lose weight and get a bit healthier. My good friend who is an MD hit 180. He is shorter than I am and when we did a body mass index test we were about equal in fat content. We had a competition to see who could get to a lower BMI quicker. We estimated by weight, and used an electronic device to verify the outcome. For me 179.9 was the magic number.

The Bet Started It

Since he was an MD, he said the trick to losing weight is very low to no carb diets. We both cut out bread and beer among other carbs. The weight disappeared like a bowl of candy in an unsupervised Kindergarten class. The interesting side effect was that my skin cleared up. My doctor friend had the opinion that something in my diet must have been causing the bumps.

When the bet ended (which I won by less than a day) I started slowly adding carbs back into my diet. The next morning after eating bread at dinner, my arms were itchy. I could tell the bumps were coming back so I went gluten free.

Learning to live gluten free and not loading up on sugar became a challenge. Many of the gluten free options for pre-packaged foods where much higher in carbs and sugar that the regular wheat based options. The good side is that I started eating more salads and vegetables while on the road and at work.

It was very disappointing to read the ingredient labels of a lot of gluten free foods. The calories tended to be noticeably higher or the portion size smaller.

Living close to a Trader Joes can be a bit of a treat. When my mom visits from here current home in North Dakota it’s her first stop. For me it is nice because they usually have some tasty gluten free options. I am doubly fortunate because there is an Aldi just down the road as well. They do have some of the best gluten free crackers and breads I have found anywhere. I also like that Aldi has an end cap with all of the gluten free so it is easy to find. Just because I can walk to Trader Joes, that is where I go 90% of the time.

When I saw the Trader Joes Gluten Free Pumpkin Pancake mix, I had high hopes. Pancakes are my Sunday morning comfort food and it had been a couple of years since I had any. Those hopes where crushed when I made the first batch. It was like eating dirt. The texture was a bit grainy and there wasn’t enough pumpkin flavor to think there was even a pumpkin in the factory that made the mix.

As a fan of the movie Ratatouille, I love the line where the chef says “was it as bad as we remembered?” and the response was “Ya until he changed it.”. So I decided to try and deconstruct the Trader Joes Gluten Free Pumpkin Pancake Mix and figure out how to make it better. It was easier than I thought. I don’t like measuring the water (or milk) because it never works. The pancakes come out thin and runny.

After several attempts I was able to make a light fluffy pancake that had good “pumpkin spice” flavor. It wasn’t even very difficult to make the changes to the recipe. So here is how I make them for my wife and I. This makes about 5 pancakes. I took out the egg yolks because it seems to come out fluffier that way.

1 teaspoon coconut oil (olive and avocado are ok, but the coconut adds a sweetness)

Stir with a fork to whip air into the batter. This fluffs the eg whites so the pancakes aren’t flat. This will be too thick so you will also need to add small amounts of milk until the batter is about the consistency of elmers glue. When you pull the fork out the dripping batter should slowly flatten out.

I use a gravy spoon to measure out the perfect sized pancakes.

The gluten free pancakes don’t absorb the syrup like a wheat based pancake, but otherwise these are pretty good.