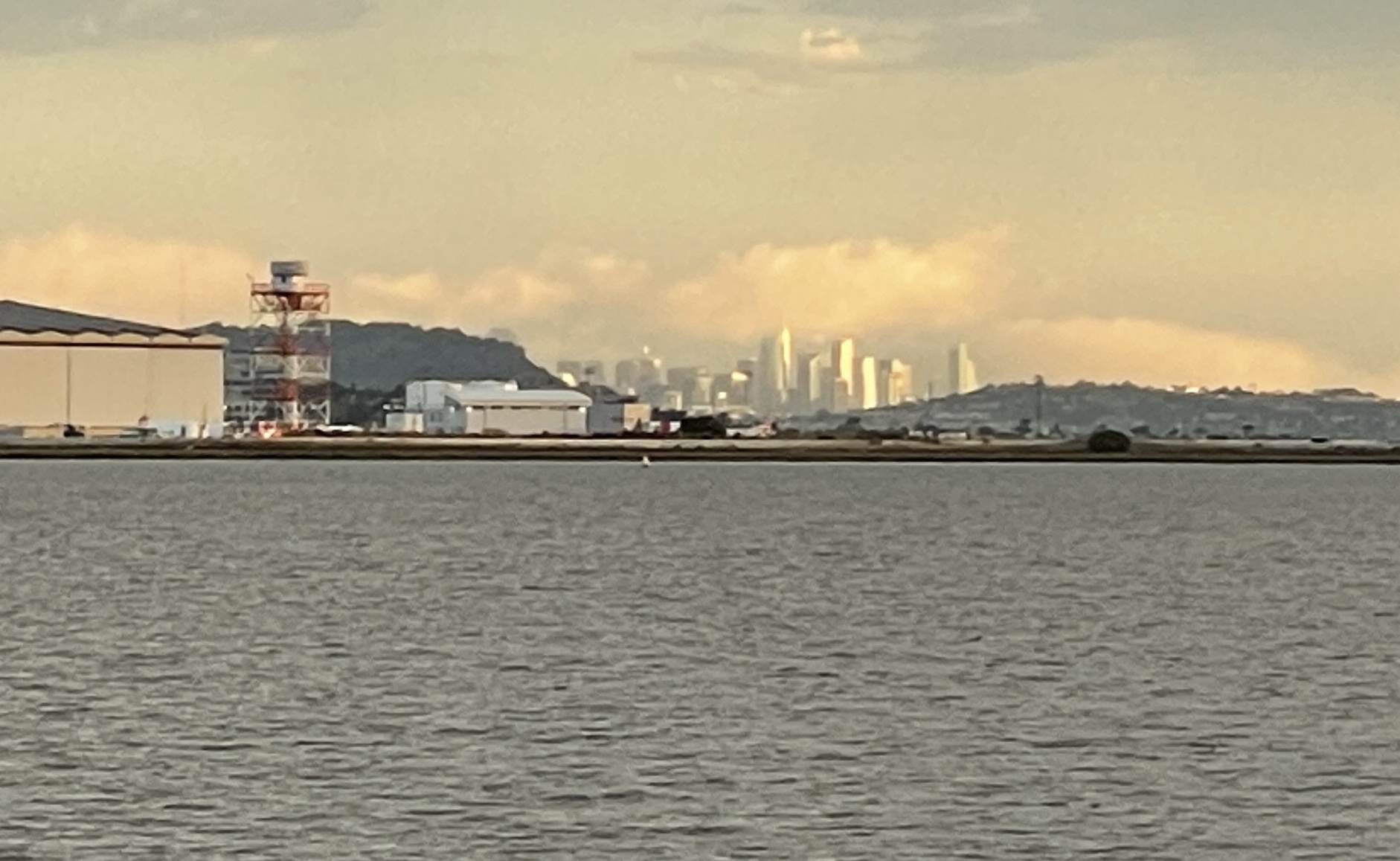 The Clean Up of SFO is very visible after years of being lost as another Airport. SFO is beginning to leave it’s transformative cocoon and blossom into a world class airport, will San Francisco do the same?

A City is More Than a Bridge

San Francisco has now also become known as the city for “urban camping”. Some might say a city over run with homeless people and drug addicted youth. A city so dirty it needs an app so it’s visitors can avoid human feces on the streets.

San Francisco didn’t used to be that way, and it doesn’t have to be that way does it? Are the people that live and vote there blinded by the fog or do they just drive across the bridge and ignore the problems?

A View From The South

This week I took a trip that began with an overnight stay on the waterfront in Burlingame. It gave me a very different perspective of the city. Sitting on the water at sunrise and watching the hi rises of San Francisco peak through the fog reminded me of when I used to look forward to visits. I haven’t wanted to visit “The City” in years.

Sitting on the bay, watching the planes land and the sun rise, I noticed the city peaking through the fog between the hills of South San Francisco. I couldn’t help but forget what San Francisco is today and warm up to the memory of my first visit. Then my watch beeped, I had a flight to catch.

Arriving at SFO in a cab, I noticed there is still a lot of open construction. I hadn’t been there in a few years. Work changed, Covid came, and I hadn’t been to SFO since the new Terminal 2 opened. As I walked into the new Terminal 1, any lingering thoughts of past visits to the City and SFO where now gone. I felt like I was in a completely different place. Nothing was familiar.

Stepping out of the cab (no not an unlicensed ride share car thank you) I looked up to see a banner that said “Harvey Milk Terminal”. My first thought was “Why a carpet bagging politician”? Honestly I was a bit ignorant to what Harvey Milk meant to San Francisco and how much his legacy still guides the city.

I don’t remember much about Harvey Milk. He was assassinated when I was just 10 years old. Since my parents weren’t fans so there wasn’t much discussion except that he was from New York and only moved here to get into office. I don’t know if that is true, but it was the discussion I recall. I am a rare third generation Californian on both sides. My grandfather was born here in 1897.

The terminal bearing Mr. Milk’s name does a great job paying tribute to Harvey Milk both in it’s display of his legacy, and in it’s subtleties. The Harvey Milk Terminal is the first terminal I have ever been in that is a quiet terminal. Acoustically it was very warm and it was easy to connect too. There were no blaring PA announcements, just video screens. Sound didn’t carry or echo. I didn’t have to listen to everyone else’s FaceTime call. Fitting for a man who remained quiet about is sexuality until he left New York I thought.

As I wandered through the terminal, I also noticed that it wasn’t loaded with chain shops like we are used to seeing in US and major international airports. The clean up of SFO brought in a wonderful display about pineapple and textiles and a few local brand names that fit the character of San Francisco.

Years ago, the city of Austin did a pretty good job of making their new airport “local”. I think the SFO board of directors did a great job carrying that idea forward. We don’t need another McDonalds or Amazon shop in the airport.

Looking at the new SFO you can’t help but hope that this desire to clean up SFO and make things better will become more infectious than Covid and spread north to the city of San Francisco. I’ll say up front I am not a fan of “urban camping” or homelessness. It shouldn’t be tolerated. If we were any measure of society, we would help the people on the street, instead of walking by throwing quarters at them or worse, ignoring them.

The worst thing that Reagan did as Governor of California was shut down a big portion of the facilities that helped people stay off the streets. I recall in the late 70’s my Dad got a DUI. He was a prominent dentist in Southern California at the time and his fine was to work at the Lanterman Center every weekend for a year.

Watching that sentencing as an 11 year old was a major formative event of my political mind. Looking back, it was exactly the right sentence and I wish we had more penalties that made sense. He didn’t hurt anyone but could have, and now he had to help people for free that needed the help. Today rich dentists just pay a lawyer and a fine and spend a night or two in the pokey if they get a DUI. My Dad did a night in the local drunk tank as well in case you were wondering.

SFO is an old airport. The main runways and basic footprint is a couple generations old now, just as San Francisco is now getting older. Now that they have started the clean up of SFO and it looks good, I have to wonder” If the city might break out of it’s political fog. Is it possible that San Francisco will return to its core values that welcomed Harvey Milk as an outsider? A city where freedom and respect went hand it hand. A city where the people cared enough to protest for change. Can San Francisco find a way to really help people instead of forcing taxes for healthcare that is despised by tourists and waitstaff alike? Will San Francisco expand on the success of the “modernization” of SFO? Can there be a new “Old San Francisco”? I sure hope so.

1 thought on “Will San Francisco Break Out of The Fog Like SFO?”